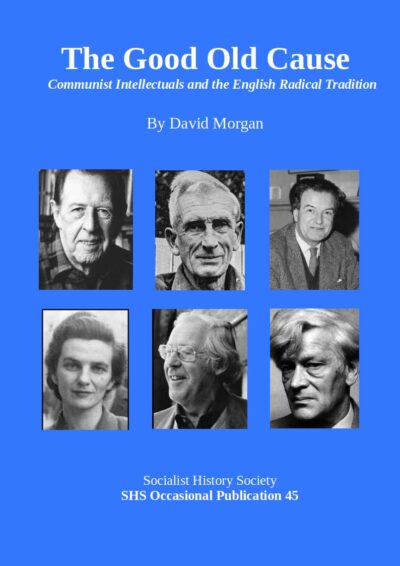 Issue Number 45 in the Occasional Publications series of the SHS

This is by no means the first time that “The Good Old Cause” has been used as the title of a publication with an historical theme of this kind. The Good Old Cause: English Revolution of 1640-1660 was the name given to a collection of political writings from the seventeenth century edited by Christopher Hill and Edmund Dell that first came out in 1949 as part of a series called History in the Making under the overall editorship of Dona Torr. It was also the name of a more recent work by Willie Thompson whose full title is, The Good Old Cause: British Communism 1920-1991, which was published in 1992.

This Occasional Publication was written with these two titles in mind but it is also a deliberate referencing of the phrase’s origins as the term espoused by veterans of Cromwell’s New Model Army and other supporters of the English Republic like John Milton to whom it was a means of expressing a shared belief in the cause of Parliament during the Civil War or of what Christopher Hill always rightly insisted on terming the “English Revolution”.

The focus of The Good Old Cause – Communist Intellectuals and the English Radical Tradition is on the approach to history of members of the Communist Party Historians’ Group, but it is not confined to members of that group exclusively; it is concerned more widely with the intellectuals who were drawn into left-wing politics, Marxism and the Communist Party in particular, during the early decades of the twentieth century.

The publication focuses on Christopher Hill, Rodney Hilton, Margot Heinemann, Arnold Kettle, Raymond Williams, E P Thompson, and Victor Kiernan, among others. It is of course far from being a settled opinion that these individuals can be described simply as “Communist intellectuals”, but it is argued that they share more in common than what separates them. As individuals they were aware of and experienced the horrors of the First World War, the Great Depression that came in the war’s aftermath, the menace of fascism and another world war that came after.

More narrowly, the publication seeks to explore a common interest in literature as a source for understanding the past and how they employed the varied literary forms of poetry, fiction, plays, sermons, diaries, and letters. to help describe an alternative perspective on the people’s history. They recognised that authors such as Milton, Bunyan, Defoe, William Blake, Shelley and William Morris could be viewed as witnesses and commentators on the historical events of their own times and were able to find in literature a means to uncover and explain a radical tradition of popular struggle that is traceable back through the centuries to peasant struggles under feudalism right up to the gradual emergence of a modern working-class movement.

Examples of this radical tradition were found in the Peasants’ Revolt, the Levellers and Diggers of the Cromwellian age, but also in popular dreams and myths of a Utopian past and in the people’s need for legendary heroes such as is expressed in the ballads of Robin Hood. The historical research of the Communist intellectuals bore rich fruit in numerous celebrated works that are littered with references to the classics of English literature, while also drawing their readers’ attention to non-literary writings in accounts of the preaching of early non-conformists and dissenters, like the Lollards, John Ball, the Digger Gerrard Winstanley and the Leveller pamphleteers. Censorship and illiteracy pose formidable obstacles to understanding the actual beliefs and attitudes of much the poorer men and women in past centuries. Few of these people left accounts of their lives, which means literary sources from independent minded writers become more valuable as historical source material.

The English radical tradition offers an attractive progressive and more inclusive perspective on the nation’s history than that found in patriotic histories and the standard narratives of many text books that set out to depict past glories and ignore the dreadful social conditions of the people and their centuries’ old struggle for justice, equality and a better life. The good old cause is integrally part of our history.

David Morgan is Secretary of the SHS and the editor of several of the titles in the SHS Occasional Publications series. He is a journalist and editor who takes a keen interest in exploring the connections between a nation’s history and its literature.