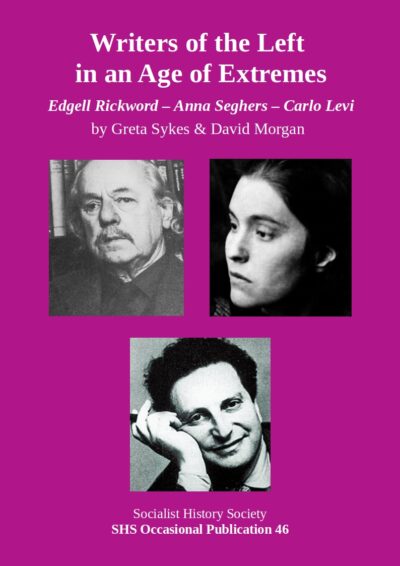 All welcome, free to attend, but you must register:
https://us02web.zoom.us/meeting/register/tZItc-CrqjouHd1qc347cjKGzrYMS58ZTsdS

The joint authors of the publication will discuss why the writers who are featured still matter. David Morgan will speak about Edgell Rickword and Greta Sykes will speak about Anna Seghers and Carlo Levi.

All three writers were also political activists who lived through some of the major events that shaped the modern age: two world wars, the Russian Revolution, the Spanish Civil War and the Cold War.
These world shattering and life-changing experiences, were, as historian Eric Hobsbawm describes, an age of extremes. Edgell Rickword, Anna Seghers and Carlo Levy were part of the struggle to create a better world out of the destruction caused by fascism and war. Through their writing and art, they expressed the indomitable human desire for freedom, hope, peace and comradeship that they believed could bring people together in the common cause of building a new society.

SHS members will all have received a copy.