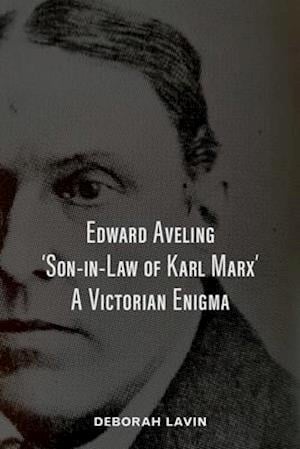 This book is the first-ever biography of Edward Aveling (1849-1898) and rescues him from his footnote status in the histories of the period and in the biographies of his contemporaries. It should be of interest to anyone engaged in research on aspects of 19th century socialism or with an interest in the lives of Karl Marx and his circle.

The author, Deborah Lavin, first came to her subject by way of Eleanor Marx, but she soon discovered that Aveling was a very intriguing and significant political figure in his own right. He was a leading presence in the British socialist movement in the last two decades of the 19th century, where he is found in every turn in the movement’s development and a controversial, indeed divisive, figure in internal debates.

As the ‘Free Love’ partner of Karl Marx’s youngest daughter, Eleanor, Aveling enjoyed billing as the ‘son-in-law of Karl Marx’. He also benefited from a close connection with Friedrich Engels. Yet, oddly, Aveling has found no real place in social history; he earns little more than honourable mentions in histories of socialism.

Deborah Lavin was intrigued by Aveling’s elusiveness. The truth, she found, was that Aveling did not live up to his billing. He showed a remarkable inability to build on his successes and left no positive accomplishments behind. Rather than looking more closely at this awkward conundrum, historians have preferred to avert their gaze and elide him from history. While Eleanor has attracted numerous biographers, until now Aveling has had none.

An important obstacle which contributed to the neglect of Aveling has been the extreme paucity of documentation on his life. In many respects, Aveling led a secretive existence and was adept at kicking over his traces. For this reason alone, he poses an immense challenge to any biographer.

Aveling saw himself very much as a man of science and prior to his adoption of Marxism had made his name as a militant secularist. It was a stage in his life which brought him into an intense relationship with another ardent secularist, Annie Besant. He would probably have found his true home in the national secular movement, but circumstances of his own making made it impossible for him to stay and drove him on to Eleanor and to Marxism.

Aveling and Eleanor worked as partners for fourteen years throughout the important years of the growth of organised labour and the modern socialist movement. But it was an ill-starred affair, remembered mainly for the manner in which it ended, with Eleanor’s tragic death, apparently a suicide.

It has always posed the severest challenge to Eleanor’s biographers to understand why she would take her own life. No construed motives have ever been wholly convincing. To Deborah’s mind the matter cried out for fresh examination. And so, she was led to begin the exhaustive search whose result is this book. It was a task in which Deborah was aided by her close knowledge of the rudimentary state of forensic medicine in the nineteenth century.

In the book Deborah lays bare glaring defects in the conduct of Eleanor’s inquest, defects not by any means untypical of the times, but amplified in this case by social attitudes which availed scant respect to the daughter of a European revolutionary. The outcome was a verdict which gained almost unquestioning acceptance, but which Deborah proves to have been not merely unsafe but almost certainly wrong.

It must not be thought that this book is a mere build-up to a tragic dénouement. It is in fact a compendious study of Aveling and his times.

We see here the development of British socialism in the formative years before the inception of the Labour Party, we gain a close appreciation of the impact of major figures such H M Hyndman, William Morris, and not least Engels; we also catch keen glimpses of Marx, Annie Besant, Charles Bradlaugh and many others. Above all, we have a major contribution to our understanding of the growth of British socialism and working-class consciousness in the later part of the nineteenth century.

Sadly, Deborah Lavin died before the work could be finished but she left an almost complete manuscript of this biography which was her main project in the last few years of her life. Having followed the progress of the book over the years, her brother, Michael, undertook, with the support of friends in the Socialist History Society, to complete the manuscript. Having seen the book through to completion, the new Aveling biography is now available as an eBook and in paperback.

Edward Aveling, Son-in-Law of Karl Marx: A Victorian Enigma, by Deborah Lavin, is available for purchase in either ebook or print form on a number of book seller sites.
For further information contact the book’s editor: michaelowenwicks@outlook.com