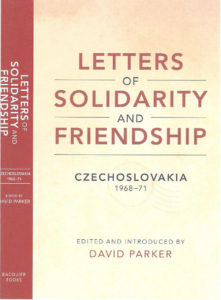 The  eloquent and powerful letters that make up this volume tell the extraordinary story of how two men who never met or spoke to each other became the closest of friends. It was all the more extraordinary given that Leslie Parker was a veteran member of the British Communist Party while Paul Zalud was a disillusioned former communist struggling to cope under the Stalinist regime imposed on his native Czechoslovakia after the Soviet invasion in August 1968. The relationship began inauspiciously when Leslie saw a letter from Paul in The Times and wrote to berate him for it. The unexpected result was an epistolary journey, conducted in defiance of the censors and concluded only by Leslie’s death, through which in Paul’s words they ‘became friends by wrestling with each other’.

This remarkable collection presents two very different yet complementary minds. Paul’s letters offer an incomparable insight into the processes of ‘normalisation’ whereby an entire country was disciplined; Leslie’s reveal his efforts to sustain his friend’s morale with humour and domestic reportage as well as incisive political commentary. Both men had an instinctive flair for juxtaposing the personal and political, blending the mundane and the philosophical in a literary discourse as moving as it is instructive.

May be obtained from Waterstones or Blackwells