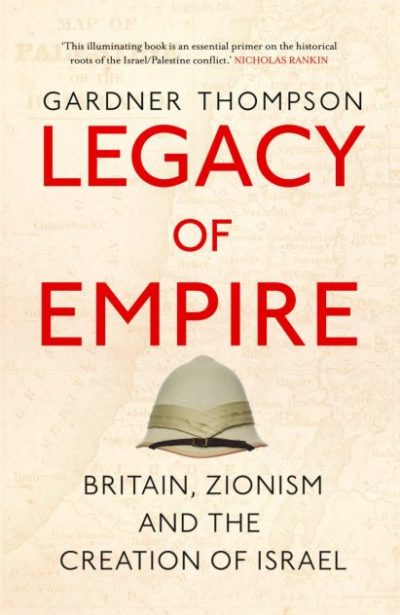 Britain, Zionism and the Creation of Israel

It is now more than seventy years since the creation of the state of Israel, yet its origins and the British Empire’s historic responsibility for Palestine remain little known. Confusion persists too as to the distinction between anti-Zionism and anti-Semitism. In Legacy of Empire, Gardner Thompson offers a clear-eyed review of political Zionism and Britain’s role in shaping the history of Palestine and Israel.

Thompson explores why the British government adopted Zionism in the early twentieth century, issuing the Balfour Declaration in 1917 and then retaining it as the cornerstone of their rule in Palestine after the First World War. Despite evidence and warnings, over the next two decades Britain would facilitate the colonisation of Arab Palestine by Jewish immigrants, ultimately leading to a conflict which it could not contain. Britain’s response was to propose the partition of an ungovernable land: a ‘two-state solution’ which – though endorsed by the United Nations after the Second World War – has so far brought into being neither two states nor a solution.

Gardner Thompson is a historian of British colonialism and a fellow of the Royal Historical Society. He earned a BA in History from Cambridge University, an MA in East African History and Politics from the School of Oriental and African Studies, University of London, and a PhD on the British Colonial Rule in Uganda from London University. Thompson taught History in Uganda, and then in London where he was Head of the History Department and the Academic Vice-Principal at Dulwich College. His other publications include Governing Uganda: British Colonial Rule and its Legacy and African Democracy: Its Origins and Development in Uganda, Kenya and Tanzania.