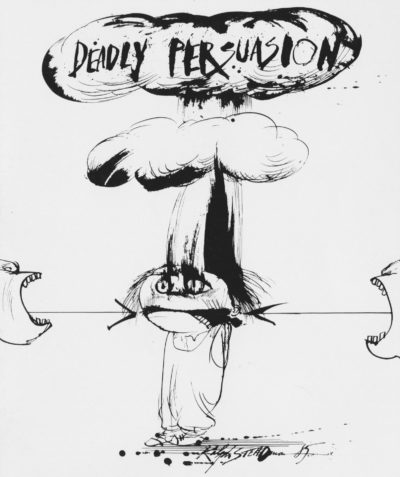 Teaching the Cold War: A Study of School History Textbooks
by Helen Mercer, Greta Sykes and Jan Woolf,
Reprint in digital form for the 75th anniversary of VE Day
download the PDF…

This pamphlet was researched and written between 1983 and 1985 during the “second Cold War” and was launched at a press conference at the House of Commons chaired by Tony Benn.
The hysteria of the time was real and nuclear war seemed an imminent danger. Children were caught up in the war-mongering, and inevitably they were scared at the prospect of something they did not understand.
At the time we were all teachers in London secondary schools as well as active campaigners in CND. When teachers attempted through their teaching to counteract war-mongering, they were accused of indoctrinating children.
Deadly Persuasion was written in response to that attack on teachers to show that indoctrination in schools was already there in the established textbooks. 35 years on we are facing not only Covid-19 but an on-going Cold War and an unabated arms race, fuelled by anti-Russian hysteria. To that purpose a major rewriting of history is taking place with the Soviet Union being blamed for starting the Second World War, and that in turn is used to exclude Russia, whose people sacrificed everything to defeat fascism, from commemorations. Once again Russians are being portrayed as somehow sub-human, echoing Nazi propaganda.
Not only is this First World inspired drive for more weapons keeping us on the brink of a nuclear exchange, but the resources to keep the military afloat are negatively affecting millions of people’s lives around the globe.
Instead of spending money on health, education and solving the catastrophic threats to the natural environment, our governments focus on fighting wars.
Today the deadly persuasion of cold war rhetoric and almost daily reference to enemies, so well researched in this pamphlet on school text books, ensures the right setting for public acceptance of military spending.