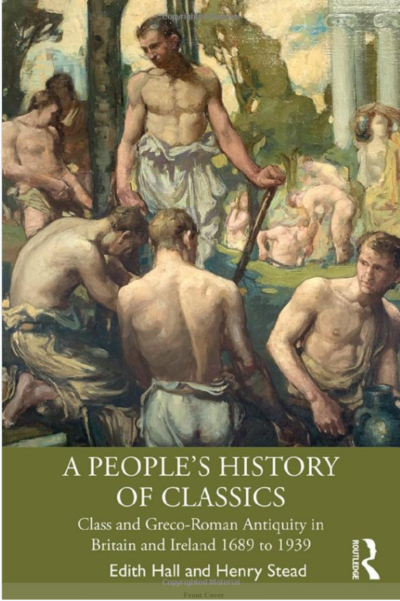 The event is free and open to all but please register in advance.
https://us02web.zoom.us/meeting/register/tZAoduqvrTwpHd0YGEPTmKN9Qi2n1-O-iCa4

The talk will be based on the book by Hall and Stead of the same name, A People’s History of Classics, Class and Greco-Roman Antiquity in Britain and Ireland 1689 to 1939, which was published in 2020. This book sets out to explore the influence of classical history on the lives of working-class people, whose voices have been virtually excluded from histories of classical scholarship and pedagogy in Britain and Ireland from the late 17th century to the early 20th century.

The authors challenge prevailing scholarship and popular assumptions that the study and appreciation of ancient Greek and Roman culture, history and languages were the exclusive preserve of the intellectual elite and had no impact on working-class lives.

The joint talk will be followed by discussion.

Edith Hall
Professor of Classics at King’s College London and is leading a campaign to introduce Classical Civilisation and Ancient History qualifications in state schools. She has published 30 books on ancient Greek and Roman civilisation and its continuing influence, and in 2015 was awarded the Erasmus Medal of the European Academy.

Henry Stead
Lecturer in Latin at the University of St Andrews, Scotland. His research project ‘Brave New Classics’ explores the relationship between the Greek and Roman classics and world communism. He is the author of A Cockney Catullus (2015), a translator of Latin poems and co-editor with Edith Hall of Greek and Roman Classics in the British Struggle for Social Reform (2015).